Crystallization - Part 2 of 4: Something Has to Give

Actually the solution was . . . to do nothing. Being a long time meditator, I was all too familiar with the phrase “don’t just do something, sit there” to gain clarity on a situation but normally don’t “practice” on vacation because, well, I was on vacation . . . .  . . . from everything. But not today. Grabbing a beach blanket, I walked down to the end of a string of cottages away from the fray, stopping in front of a unit being rented by my brother-in-law. I went inside and grabbed a couple of pillows, placed them on the blanket and settled into a folded leg position on the ground overlooking a lake canopied by a brilliant blue sky and let my mind settle. The wind was gusting with enough force to rock me gently back and forth, with trees rustling white noise and waves beating the shore at the base of a bluff 20 feet or so below me. Dropping my gaze towards the ground I quickly slipped from the sticky bonds of thought, anger evaporating, leaving me in an internal space to contemplate what was actually going on. It is hard to say for those that don’t meditate what happens next, but it is a lot of nothing, demarcated by thoughts and feelings, followed by a larger expanse, followed by more thoughts. Wash, rinse, repeat. Sometimes boring, painful, exhilarating, terrifying but never predictable.

I don’t remember how long I remained in place but I eventually stood up stretching my legs now long fast asleep and walked slowly back to the cottage. As I did so, in the empty space that I had created in my head a pattern started to emerge. I was feeling fear around something, but what? It was something I really wanted to do, but didn’t feel equipped properly to do it. Stopping along the path, I mused further and realized it had to do with drawing, specifically portraiture. I was pretty sure at that point I had uncovered a previously undiagnosed case of fear/joy. If you are not familiar with the concept, think of the name Fear/Joy; it is exactly what it sounds like. A situation where you really, really need/want to do something but there is a larger than normal dollop of fear straddling it, in some cases completely obscuring the fun object. And unfortunately, to the best of my knowledge, the only cure is to push through the fear. Crap.

In my case the Fear was approaching people I didn’t know well, or at all, (not normally an issue for me) and asking them questions, taking pictures and then perhaps doing a sketch of them which was the Joy. A sketch that somewhat resembles them to be considered a “success”. I’ve done my share of drawing people but always in a studio setting or capturing someone when they aren’t aware of it; quick sketches on a plane or at a bar or while out somewhere public but nothing where I had to make it look like the person sitting across from me. My Aunt Marilyn, a childhood art inspiration to me, was a master at creating portraits for tourists on Jackson Square in New Orleans for many years.  I have some of her work in a flat file at home, portraits of my grandparents she drew years ago. There is an effortless quality, a sparseness of detail, yet enough is captured to ensure the viewer knows who the person is in a thoroughly authentic and non-caricatured way. This is an extraordinary skill of which I had virtually never practiced.

Being that this was Wednesday morning and the tennis tournament, the predominant activity of the day was getting underway, I decided to take a chance. I threw some drawing supplies into a backpack and headed to the courts to see what might inspire me. First up was baby Eloise, the latest addition to our extended family, all of seven months old - perfect. I could take as many pictures as I needed since she wouldn’t complain, with the added bonus that she wouldn’t know if I drew her poorly. Downside; she was a tough interview subject.

From there I sketched one of the many cousins in the family who was herself drawing and after snapping her picture, went in search of other prey. I pounced on one of the cooks grilling ribs behind the Inn in anticipation of a barbecue that evening. I have to laugh as I think back on the fact that I blurted out that I wanted to do her portrait and she was the one that wanted to “interview” me first. Note to self: modify how you approach your subjects. We spent a fair amount of time talking, after which I took some photos and was on my way. And so it went over the next couple of days, covering a range of guests and one of the carpenter/handyman on staff. All in all not so hard to overcome my initial trepidation and a lot more fun than I had ever imagined.

My last interview was with the waitress that had been serving us all week in the dining room of the resort. She agreed to meet with me between work hours, so we met up Friday morning after the breakfast tasks had been completed and walked out to a picnic table under a couple of shade trees out behind the Inn. While taking a couple of reference photos, she shared a little about who she was, where she was from and a bit about her family. As I struggled with the sketch (I find it hard enough to try to draw someone precisely not to mention carry on a conversation at the same time) we talked about what she wanted to do upon graduation and other future plans, including grad school followed by the possibility of being a museum curator. I continued drawing as I shared a story about a friend that I knew who had curated an art museum in Kohler, WI where I had just visited with my wife a few months before. Over the years, during my time as a science illustrator, I’ve had a number of opportunities to go behind the scenes to conduct research for projects of some sort or another and have always loved museums and research institutions in general. We continued to talk for a bit as I finished the sketch which had a passing resemblance to her. 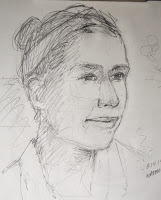 We parted ways and I watched as she headed back to the kitchen while the idea of museum curation still rattled around in my head. I turned back to the sketch and continued to refine it while I smiled to myself, remembering the smell of moth balls that emanated from the trays of insects in the entomology department at the Field Museum in Chicago so many years ago. “No one goes into something like that these days; how cool. THAT was a Dream with a capitol D”.

In the warm summer haze, my hand sticking to the paper as I drew, I could feel a small piece of awe landing in the supersaturated liquid that was my being. Crystal began racing outward in all directions.

Have you ever struggled with a decision for a period of time where you were not sure what direction to take but then, in an instant, “knew” what to do? Where confusion and opacity were replaced with a feeling of unity or a clear path to follow? One moment you didn’t know and the next you are certain?

And afterwards did you ever "wonder what just happened?"

While most of my personal decisions of any magnitude are done through careful (some would argue agonizingly obsessive) deliberation, I have also had those “aha” moments where everything snapped into place and, without a doubt, I knew what needed to happen next. Over the next four posts, I’ll share a recent experience characterized by this type of awareness as another example of how the creative process manifests itself.  Hopefully I will be able to provide you some insights on how to prepare for the same type of transformation.

There is a concept in chemistry called “instantaneous crystallization,” which is a rapid state conversion from a liquid to a solid crystalline structure in supersaturated liquids. This takes place when a small particle or “seed” is introduced into a solution that contains a higher concentration of a particular material. An almost instantaneous change takes place in dramatic fashion and reacts much like lightening striking. However, in this case it serves as metaphor with a universal truth: small things can precipitate great change due to incredibly powerful surrounding forces. Think Rosa Parks sitting on the bus refusing to give up her seat in the supersaturated environment of the deeply segregated South in 1955. Rosa is the seed that started a crystallization of the Civil Rights movement and equality rulings across the country for years afterwards.

I can only wish that my actions had the pertinence of a human rights movement. It might strike you as a bit smug or pretentious to assume similarity between such an important historical event and my “state change” but when such a shift occurs internally (and since we are all at the center of our own little universes and experience everything first from the standpoint of YOU*), it can take on similar importance. For some, the change may be so profound that it causes physical effects such as disorientation or taking your breath away. Note: as stated in infomercials - “individual results may vary”.

Supersaturation for me took on the form of many years of delaying gratification of one type for the delivery of another. I had a family to support, kids to help through college, an IT/design career that allowed me to do that and a variety of other things that helped to interfere or refine what it was that I was supposed to be doing with my life. And honestly, those were the things I needed to be doing at the time. No regrets, just backwards observation of the path that had passed beneath my feet while fixing my gaze forward. All the while, I had been learning oil painting skills along with portraiture (see earlier posts for some results) for a number of years, dabbling at it, moving through the process intuitively banging at walls trying to learn skills in a hit or miss fashion on the side. It wasn’t until I was on vacation recently that I had an opportunity to reflect on just how neglected certain aspects of my creative being had become, allowing my internal mix to reach a critical level.

To provide a bit of background, this is a vacation like no other. My daughter described it as “not a vacation but an event,” one from which we all need another vacation to recover. Relatives and friends from around the country converge for one week of get-togethers, parties, organized competitions, and events all set in a gorgeous northern Michigan environment. Introverts beware! It really is a great time for the most part but I’ve found as I’ve gotten older that it all gets to be a bit too much by the end. And since it is everyone's vacation. rather than be a buzz kill, I chose to find other pursuits and stay out of the fray but as the week approached its halfway mark I felt I had reached my tipping point. Waking one morning with an "anger" hangover, I realized this was no longer a vacation but an endurance test. I had to do something . . . .

Up Next: Something Has to Give

Email ThisBlogThis!Share to TwitterShare to FacebookShare to Pinterest
Newer Posts Older Posts Home
Subscribe to: Posts (Atom)
When you submit your email address, you'll receive a response from Feedburner. Make sure you click on the embedded link in the email to confirm your subscription to this blog.