I recently spent an afternoon at Ryerson Farms, to walk along its muddy trails, sit under the shade of an Oak Tree in a meadow, the soundtrack a hum of honey bees around a hive or the occasional screech of a Red-tailed Hawk. Along the rushing waters of the DesPlaines River I stopped to capture a small grouping of trees leaning over the coffee-colored waters that rushed by. Several feet below me on a bank next to the water sat an American Bullfrog motionless the entire afternoon basking in the warm summer sun while I sat painting.

Another piece I am currently working on which is titled "School's Out" started out as a crappy video I took on my iPhone while snorkeling a couple of months ago. Swimming between coral heads just off shore with my wife, we were instantly surrounded by a school of thousands of 3-4" fish flashing brilliantly in the sun. As we moved, so did the fish, swooping and diving in shimmering synchrony.

After coming home and reflecting on the experience and then watching the video, I started doing some oil sketches to play with color and composition. The images below are studies for this piece as well as playing with color from underwater images take around Vancouver Island from a trip a few years ago.

In the meantime, I've been so taken with the underwater world, that I am reupping my scuba license (I was quite active in the sport about 25 years ago, including a stint as a Coral Reef Diver at Shedd Aquarium in Chicago) with my son who is getting his for the first time. My goal is to return to Vancouver as well as a number of other spots in the world to gain reference for future paintings. Stay tuned!

Komodo Trail
I've been long fascinated by Komodo Dragons, the fearsome predators of the island from which they take their name. With their large size, venomous bite and superior intelligence, they are a match for any size prey on the island including the occasional human. As a trip to the island is unlikely in the near future, I've been seeking reference online as well as planning a visit to a zoo in the US in preparation for a painting. Even though they are rare in the wild, found only on a handful of islands around Komodo in the South Pacific, they are quite numerous in zoos here in the States. Though some have been wild caught, a large number have been hatched in the zoos and shared between institutions.

I've also been fortuitous to have reference provided by a daughter's friend who completed an internship studying these beguiling creatures. Below are some studies I've completed based upon her photos and online resources while planning a zoo visit.

One thing to keep in mind when using zoo animals for reference is that due to lack of exercise and the steady diets inherent in captivity, physical appearance and habits can be quite different than those in the wild, underscoring the need for a wide range of reference materials. Visiting the animal in its native environment provides the correct reference as well as study the flora and fauna for the background of a painting. This painting, by the time it's completed, will most likely have taken a three to four year journey from original inspiration to the canvas, including this search for background materials.

If interested, this video on the Discovery Channel demonstrates just how wily a predator they are. 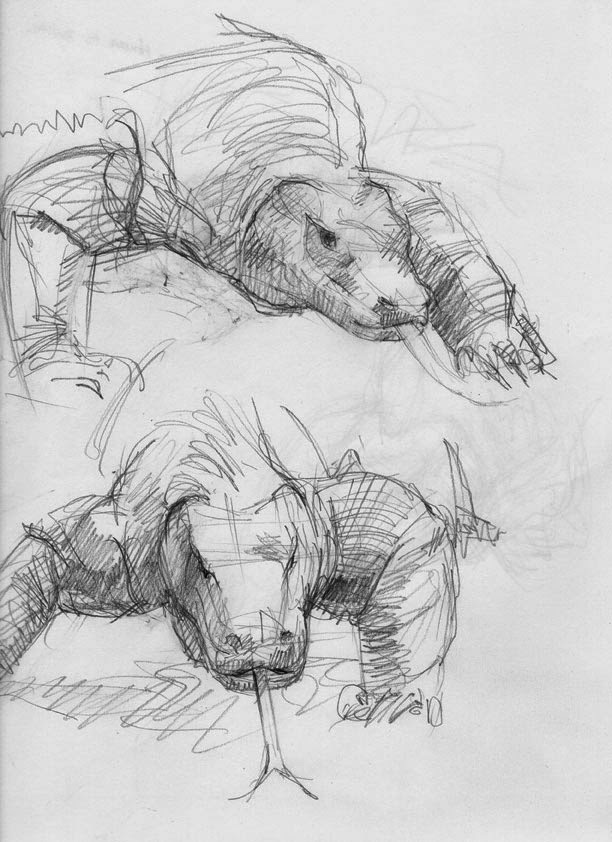 Posted by Unknown at 4:38 AM No comments:

The month of May disappeared as my three kids all graduated college over the course of three weekends, so I've spent a fair amount of time on the road visiting them. Now that things have settled down a bit, I've been able to get on with my latest paintings.

I put the finishing touches on Moray! which is shown below. If you are curious to see what the preliminary studies look like, please visit my earlier blogposts from April and March which show sketches and some oil studies. It is the result of a chance encounter I had with a Moray Eel while snorkeling near Stingray City on Grand Cayman back in March.

Email ThisBlogThis!Share to TwitterShare to FacebookShare to Pinterest
Newer Posts Older Posts Home
Subscribe to: Posts (Atom)
When you submit your email address, you'll receive a response from Feedburner. Make sure you click on the embedded link in the email to confirm your subscription to this blog.