The painting called Perserverence, shown further down the page, began as an exploration of texture and ended in a complete theme. It underscores how one has to be aware of possibility, letting things unfold without hurry, having the courage to follow turns and accidents as they occur, while not really knowing where they will end. Many times it ends as an interesting study that joins others in a drawer. Occasionally, they come to fruition like this particular painting, pushing beyond the limits of where we thought we could go, whether it be subject matter, technique or style.


A number of years ago I was visiting family in the Pittsburgh area and their yard was filled with amazing pine trees sheathed in bark of varying hues of deep red, burnt siennas, grays, ambers, blues and greens. I found a particularly intriguing slice of bark laying on the ground at the base of a tree, which I decided to render. I had a gesso panel with me as well as my acrylics and started exploring the color and texture of the bark. I let my eyes run over the rough and tortured surface, leaping down into the perfectly round insect borings, out again over the checkered surface and through the valleys running between the individual blocks that made up the tree’s rough outer hide.

The study itself started with a series of thin washes of ochre to give the painting a base and a bit of tooth for the following layers to adhere to. For painting on gesso board, I sometimes thin my acrylics out to a watercolor consistency, allowing me to put down a series of quick drying luminous glazes that provide a really great base layer. I then used a small sea sponge to place down a layer of random texture, not so thick that it obscured the warm layers behind it, but enough to add visual interest. I then worked in areas of more solid color and drew in the forms of the bark blocks extending out to the edge of the drawing. I finished the sketch with some opaque whites and grays to simulate the reflective blue color appearing in the woody finish. The result is shown at left. I found the original piece of bark so interesting that I still have it today, stored along with the studies shown here in a flat file.

Still intrigued with the challenges of rendering bark, I did a follow-up drawing of a chain-sawed log that I pulled from the wood pile behind our house. The mechanical texture left by blade passing through the wood contrasting with the rough surface of the bark caught my eye and made for an interesting exercise. The result is at right.

Several weeks after starting the process of studying bark, I was still not thinking of a painting, choosing to let it gestate while I gathered more reference. My wife and I were walking through a local forest preserve and discovered a Green Stink Bug making its way up the side of the tree. We watched as it slowly traversed the cavernous gullies in the bark. It made me think how if we humans were reduced to its size, this daily walk for this insect would be a challenge for even skilled mountaineers. It makes sense that it evolved wings to make the whole enterprise much easier! We took took a series of photos to capture its struggles and the sense of scale of the bug against the tree and set them aside for future reference.

Returning home, I went back to the wood pile for a bit more inspiration and came across another log that looked like it had started to sprout a limb before the tree was felled. From around this stump, the bark had pulled away, revealing a weird moonscape so I brought the log into the house and set about examining it with a magnifying glass. While doing some sketches of this particular log, reflecting back on the images we took in the forest as well as the earlier studies, the final image started to come together in my head.

To capture the sense of vertical drama I had seen with the Stink Bug's climb, I chose a 12 x 36" format. Gessoing the Masonite surface with a roller, I put down three layers, sanding between each coat for a smooth finish with just a bit of tooth. I spent a fair amount of time completing a series of pencil and colored pencil sketches to get the composition just right, since it was an odd working size.

The final result is shown right. The piece was done with acrylic, using a bit of retarder mixed in to do the main blending in the large woody area in the middle. I then painted my details on top of that using opaque mixes. For the bark, I used the sponge technique I had practiced with my smaller piece, adding in the details to the bark, leaving the rendering of the Stink Bug itself until the final phases of the painting. I then varnished it with a semi-gloss finish to bring out the color.

Since completing this painting, I have had a great regard for the silent sentinels that make up our forests, standing as mute testimony to the passage of time. I often will put my hands against them, feeling the sun warm their cold skin as they rise from their winter torpor or cool in the shadows they create as respite from summer’s hot breath. They are some of the oldest living things on Earth, with some species suspected of being in excess of 30,000 years old. To their kind, our brief Mayfly lives flit by around their bases as they push their leafy arms skyward towards the sun.
Posted by Unknown at 3:17 PM No comments:

A Painting in Process: the Making of Elephant Dreaming

In this post, I'll share with you a painting that has been in progress for about a year and a half. Not all of them take this long, which is why I wanted to share the process, as I've been able to document most of the phases. Also, for a work this size, I'd normally do a series of sketches and studies leading up to a completed piece, but in this case, I am doing much of the design work on the canvas. I started the overall concept with some drawings, but quickly jumped to the canvas and started reworking it. It is kind of an interesting way to go about it as I am not really sure of the final result.


The concept for the painting actually started with a thunderstorm about a dozen years ago or so while I was vacationing with my family in northern Michigan. We stay at a resort each year, where the last evening of our week's stay is punctuated by a talent show, put on by a group of willing vacationers. That particular year, one of my daughters came down with a fever so I elected to stay behind at the cottage with her, enjoying the peace of a late summer evening as the light left the sky. In the quiet, over the waves softly lapping at the shore, I heard a distant rumble as a thunderstorm made its way towards us from the far side of Lake Michigan. As it moved closer, I was reminded me of an article I had recently read that described an elephant's ability to "hear" just such a thunderstorm up to 75 miles away through the ground, sensing subsonic sound waves through the pads of its feet. For a couple of days afterwards, I continued thinking about how many other life forms around us have distinctly different senses (read Thomas Nagel's essay "What Is It Like to be a Bat" for a interesting bit on senses and how they shape one's consciousness),  how we as a species have evolved and what senses we've jettisoned along the way to our current form. After all, at a specific point in time, every one of us goes through a phase in utero where we show evidence of a tail, which disappears before we are born. I toyed with the thought, turning it into a short essay called Elephant Dreaming.

Fast forward a number of years, where I am sitting around on a hot forth of July afternoon, sketching for another painting when I start playing around with an image of a female reverting back to a primitive form, replete with zebra stripes, at left below. I sketch out some other possible images before settling on a set of images that I find compelling but also relevant to this theme of lost senses. 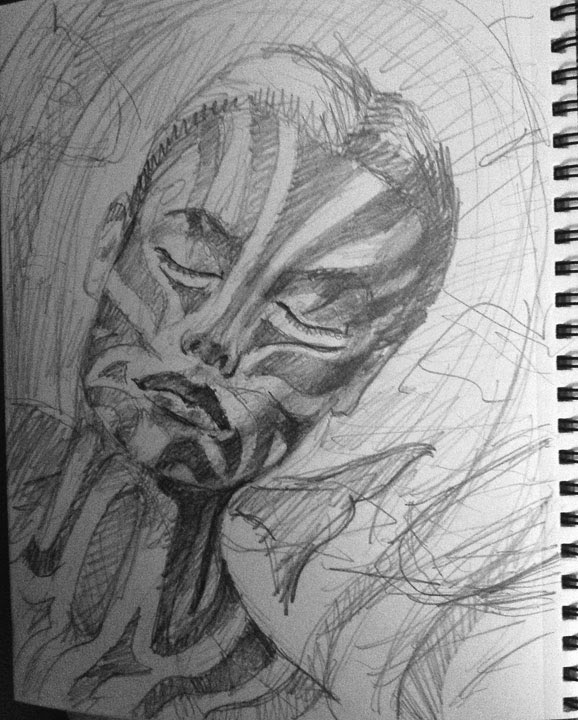 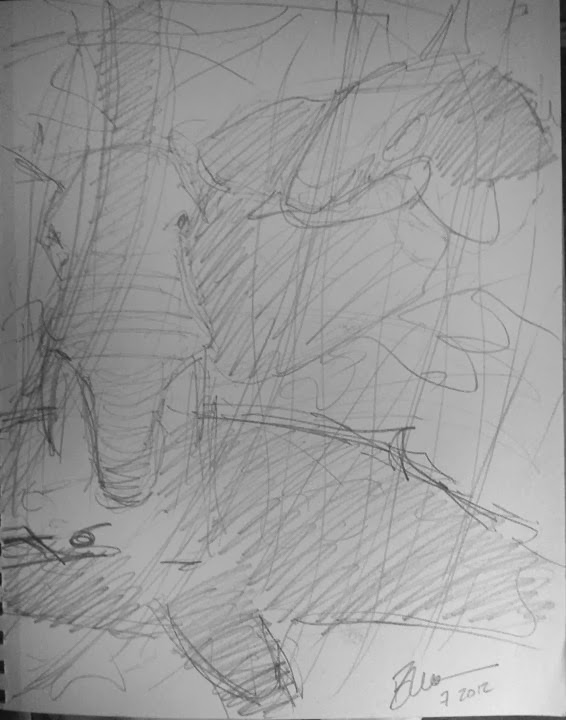 I chose oil for this particular piece as I wanted the power of blending to make some of the images more realistic, while letting others go soft as well as the opacity of the medium. In the first image of the canvas below, I wash in the background of a fairly large (18 x 36) canvas over which I layered additional gesso and sanded fairly smooth to remove some of the tooth of the canvas. I sketched out a rough layout in graphite with a female on the right dreaming of her evolutionary past, which includes an elephant, thunderstorm, a whale and other bits to add interest. I then washed over it with a thin layer of Sienna and Burnt Umber.

After letting this layer dry, I went back at the canvas to move the elephant up to the center to become part of the mountains in the background, make the thunderstorm in the background larger and started to work up the foreground, which includes a honeycomb, and a fetus with a tail. After adding detail to the woman's face, I then set the canvas aside to work on some other pieces as I wasn't sure where to take it next.

A couple of months later, I pick up the trail again, removing the fetus (due to lack of popular demand-that's what I get for leaving the unfinished piece on an easel in the living room where everyone can comment on it in process!) as well as started reworking other parts of the elephant as I felt like the earlier version wasn't dynamic enough.

I also added two new characters, the Hammerhead Shark and the Dung Beetle both of which are empowered with some rather extraordinary senses. The Hammerhead, with its eyes spread wide has an array of sensors located along the front of its head that can detect electrical currents as little as a billionth of a volt, allowing it to detect its prey by the activity of its nervous system alone. The Dung Beetle uses the Milky Way Galaxy in the dark African sky to navigate by. So in they went. I also sketched in some bees dancing, relaying to one another a rich source of pollen, at an angle that was a bit more dynamic that a flat head-on of the honeycomb. As much as I liked the geometric appearance of its cells, it proved too distracting for the composition.

The last image shows where it stands today. The bees are starting to come together and the elephant has a more dreamlike quality while being more solid and lit from above by a hot African sun. The Dung Beetle was too centrally located, and blocked eye flow through the canvas, so he is out for now. The Zebress' head has become more refined and the highlights create more of a three-dimensional form. Will the Dung Beetle make its return? Where will it all end? Stay tuned for more updates.

Posted by Unknown at 8:37 PM No comments: